June 2, 2013
by GLORY
Comments Off on Gay Games X 2018 Bidding Finalists All Include Sailing

Limerick, London, and Paris continue in the race to host 2018 event, the world’s largest sport and culture festival open to all.

All three bidding cities have included sailing among the 34 sports and cultural events they will offer.

Sign up now for the 2014 Gay Games 9 Regatta at gg9cle.com, in 20 new Tartan One Design yachts supplied by sponsor Tartan Yachts, based on the 26″ Tartan Fantail.

A nice report from the first Gay Games Sailing Regatta by Jim Provenzano of the Bay Area Reporter in San Francisco.

It includes mention of the creation of GLORY during the regatta. Full text here.

“No other more visually showcases the geographic beauty of Sydney than sailing. With Sydney Harbour Bridge and the skyline in the background, a dozen San Franciscans and various other sailors enjoyed watching the first leg of sailing’s first time inclusion…….

…..Since the Games, sailors have formed an international gay and lesbian sailing group to promote and support gay sailors, and to lobby for the inclusion of the event at future Gay Games.”

We’ve come a long way since!

April 1, 2013
by GLORY
Comments Off on Harken Winches Go Glam!

We hope these get fitted to the 20 brand new Tartan One Design yachts which are lined up for the Gay Games 9 regatta in August 2014. 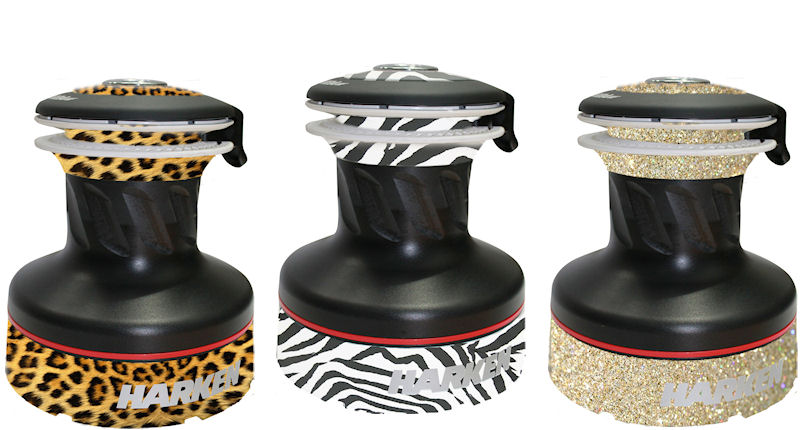 Tartan has become one of the first platinum sponsors and major sponsor for sailing.

Detailed plans and specs of the boats are due on or before May 1.

Congratulations to all involved in getting this agreement signed.

3 out of the 5 cities bidding to host the Gay Games in 2018 have included sailing. They are London, Limerick and Paris. The other bidders are Amsterdam and Orlando.

The bid books from all of the bidders can be found at 2018.gaygames.org

The bidders have all indicated that the sailing regatta will take place at nearby fresh-water lakes or reservoirs with sailing facilities. However, while the websites for the regatta venues indicates that they can run the event – none of them would seem to have enough identical boats.

They all have a number of 2-person dinghies for rental (catamarans for the Paris venue) but they don’t have enough identical boats to be able to accommodate the number of competitors expected, nor do they have enough spinnaker boats for the Competitive division.

Also, the Red Book for sailing suggests that 3-4 person keelboats are preferred to dinghies as these allow a wider range of participants to take part.

GLORY has asked them to clarify the type and number of boats they expect to provide.

January 29, 2013
by GLORY
Comments Off on Poll: Small or Large boats in the Gay Games?

We may have either small or large crew boats for the Gay Games – which would you prefer given the logistics of organising teams?

The registration for sailing at Gay Games 9 Cleveland+Akron 2014 is now open!

Read the event information and the FAQ here then go to www.gg9cle.com to register and save $20 if you register before 31st December.

The CrewFinder system will be available on glorysailing.org very shortly enabling skippers to find crew and crew to find skippers.

December 18, 2012
by GLORY
Comments Off on Welcome to GLORY

GLORY – The Gay  & Lesbian Organisation for Racing and Yachting, exists to provide a voice for gays and lesbians in the sport of sailing and to encourage and assist individual sailors, clubs and teams.